After a month of pressure, cryptocurrency markets appear to have broken a stranglehold invoked by the  US Securities and Exchange Commission’s decision to reject (and later re-evaluate) several Bitcoin Exchange Traded Fund proposals.

While the middle of August saw a minor rally, Bitcoin has largely struggled to surpass the $6500 USD mark, while Ethereum has remained deflated below $300 USD.


Among the cryptocurrencies seeing losses, Substratum leads the pack with a -7.34 decline, while Aion and VeChain follow closely by posting losses at -5.53% and -4.67% respectively.

Bitcoin dominance itself presently hovers at around 52.8%, while the total market cap of all cryptocurrencies is presently valued at $230,548,537,071 USD.

Our sentiment analysis, courtesy of Remy Stephens, noted that while sentiment on Bitcoin itself remained neutral, the altcoin market had taken a bullish term with support rallying for Basic Attention Token, Wanchain, and Bulwark – among other projects.

The US SEC is expected to resume its course and offer a verdict on yet another Bitcoin ETF proposal by the 30th of September. More broadly, US regulators have announced the continuation of ‘Operation Cryptosweep’ – a joint endeavor that has probed some 200 ICOs and cryptocurrency firms.

On the 22nd of July at 00:00 UTC, VeChain deposits and transfers will fall quiet on Binance – as one of the largest cryptocurrency exchanges is now preparing to facilitate a token swap that will concert VeChain (VEN) to VeChain Thor (VET) tokens.

The move will see all VEN trading pairs halted at 4:00 UTC on July 23rd, whenre Binance will take a snapshot of users’ wallets to redistribute 100 VET tokens per every VEN token held.

For detailed timeline, please visit the link below. https://t.co/ddqWaefWDl

The VeChainThor Blockchain is days away from being unleashed. Please review the following timeline and be prepared to witness Blockchain X! pic.twitter.com/kxlQkcc6PI

From August, X-Node status monitoring would resume on the VeChainThor blockchain, while VeChain Thor (VET) tokens would thereafter reintegrate with Ledger.

The launch of its proprietary network marks a new milestone for VeChain Thor; the platform aims to create a decentralized ecosystem with fully traceable products and is hoping successfully to combine blockchain technology with hardware tracking devices. Using a Proof-of-Authority consensus algorithm, the blockchain’s main network launch was prepared by establishing the first authority master node.

The network established a partnership with Safe Haven – a Singapore-based company aiming to deliver blockchain-driven solutions for inheritance, asset control, and asset distribution – when the latter announced that it has re-aligned and will proceed to build its product atop of VeChain Thor’s network.

The VeChain foundation has announced the official launch of its own platform after the first block on the network was mined successfully.

At exactly 08:00:09 the first block was successfully mined. The VeChain Thor Blockchain has officially launched. pic.twitter.com/aYZs19GoAO

VeChain is aiming to create a decentralized ecosystem with fully traceable products and is hoping successfully to combine blockchain technology with hardware tracking devices.

Using a Proof-of-Authority consensus algorithm, the blockchain’s main network launch was prepared by establishing the first authority master node. This has been criticized over the potential for centralization, but VeChain has suggested instead that this mechanism is going to be beneficial for businesses, as it will offer a higher-performing network and will be best suited to cater for supply management.


Before the launch of its own blockchain, the VeChain Token’s network existed on the Ethereum blockchain as an ERC-20 and the project plans to undergo a token swap, changing from VEN to VET in mid-July.

For now the cryptocurrency’s foundation has provided details of the timeline moving forward for the token, stating that mobile wallets and the token swap are still on the way.

The VeChainThor Blockchain is days away from being unleashed. Please review the following timeline and be prepared to witness Blockchain X! pic.twitter.com/kxlQkcc6PI

Bithumb, a major Korean-based cryptocurrency trading exchange, has announced that it is in support of the token swap and the process will be “carried out automatically without requiring any further actions from [their] customers.”

There remains a lot of electricity surrounding the alt market this week, but it seems like it’s buoyed by a sort of nervous energy as bullish momentum surrounding Bitcoin falters.

So let’s start there this week.

The erratic changes come after a month of relative stability, which buoyed the Alt markets.  The big shifts in sentiment are something to consider, because much of the market still moves with Bitcoin. When it broke down last night, for example, many altcoins lost all of their daily gains.

All that said, the 4o influencers and traders I follow remain bullish on several alt-coins.

If you’re new here, I scrape the social media of the aforementioned cohort of prominent crypto personalities and track when they mention individual coins. I mark down whether they mention them in a positive, neutral or negative light and gather a net score for each coin (+1 for positive, -1 for negative).

You can always find the full list of coins I’ve analyzed at the end of my posts.

Below are charts showing the 10 hottest coins in the last two weeks, and how they got there.

As always, here is all of the data I collected for this piece.

The Hong Kong and Singapore arms of PriceWaterhouseCoopers (PwC), an international consultancy corporation, announced this week that they are partnering with blockchain startup VeChain.

The companies made the announcement in a press release on PwC Hong Kong’s website saying that they are “delighted to announce” the new joint partnership which has seen both PwC Hong Kong and PwC Singapore each take a small piece of the ownership interest pie in VeChain.

VeChain is a company focused on providing anti-counterfeiting, supply chain management, and the Internet of Things (IOT) services – this is which the interconnection of computing devices is as a network created in order to send and receive data via the Internet. Vechain works the services along the blockchain and PwC intends to merge the VeChain platform into its own framework. This implementation will need to use VeChain

This implementation will need to use VeChain cryptocurrency coins as a means to access and perform certain necessary transactions. The system PwC is adopting from ‎VeChain has designs which apply the IoT technology created to work to create private keys for each product listed which enables tracking them all the way through the shipping process.

The company explains how the deal will look, saying that “PwC Hong Kong is now in discussions with VeChain to provide trust based services on the VeChain platform. This will require the use of VeChain Tokens to access and perform transactions on the platform.”

PwC Chairman Raymund Chao believes that this move is a strategic one which will bring in a fresh sense of creativity through the innovative professional services using the blockchain technology.

Excited at the prospect, Chao says that they “are glad to establish a deeper relationship with VeChain, which aims to build a trusted and distributed business ecosystem to help address long-standing challenges in supply chain management, food trust and anti-counterfeiting areas. VeChain’s mission aligns with PwC’s purpose of solving important problems and building trust in society”.

April was a nostalgic month.

The charts were blooming a beautiful green. Bitcoin was stable. And for the first time since January, you could wake up with the reasonable expectation that you hadn’t lost half your stash to a 4AM flash crash.

Picking winners out of an almost universally good month for Alts is no easy task, so today I’m going to look at things a bit differently.

Throughout April, I tracked the social media presence of 40 crypto influencers and traders, collecting data anytime they mentioned a specific coin or token and whether or not they discussed it in a positive or negative light.

Overall, I compiled data on 272 different cryptocurrencies from 2,908 separate mentions. Some clear winners emerged, but I noticed that a handful of coins that weren’t necessarily in the top 10 had a unique quality — they received no negative sentiment.

For lack of a better descriptor, I’m going to call these sentiment gems. Each of these coins received at least a dozen separate mentions from multiple members of my cohort of influencers and traders, and not one said a negative thing about them.

Some are household names in crypto, some are popular in several circles, and some are off the beaten path.  So let’s separate them into two categories: Those with market caps above $100 million USD, and those below.

The charts farther down the page show each of these coins sentiment, and how it grew during the course of the month. 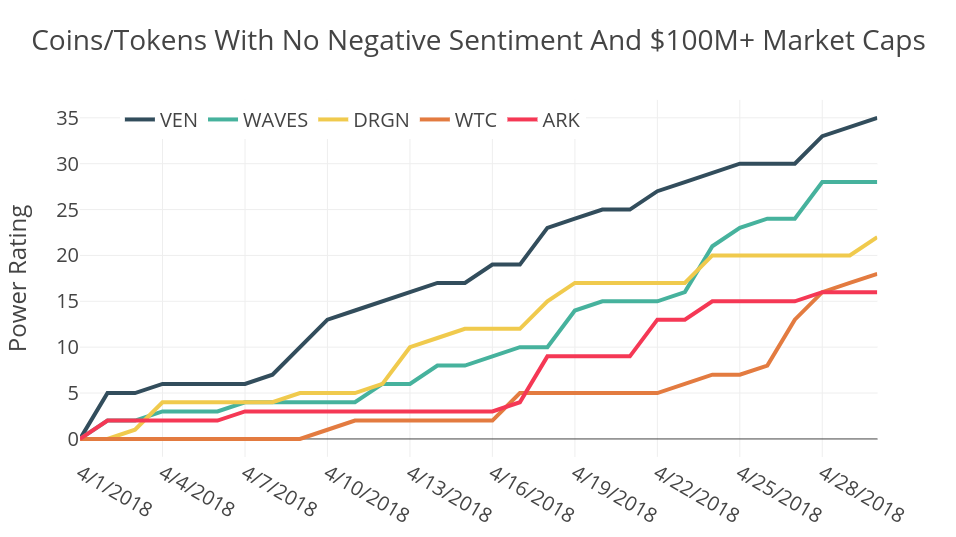 For me, $VEN and $WAVES are the real standouts here. In terms of volume of total mentions, both landed in the top 10 percent. It’s pretty remarkable to be discussed on a near daily basis for a month and never have a negative outlook pegged to you.

$DRGN is also something of a sleeper. While it certainly has a following, with a market cap above $250 million as of this writing, it’s still not on many exchanges. You have to figure that will change sooner or later, which would likely be a boon to the price.

The second group is certainly more in the high risk-high reward category. Small-cap coins can be incredibly volatile and it’s difficult to know if one will catch fire. 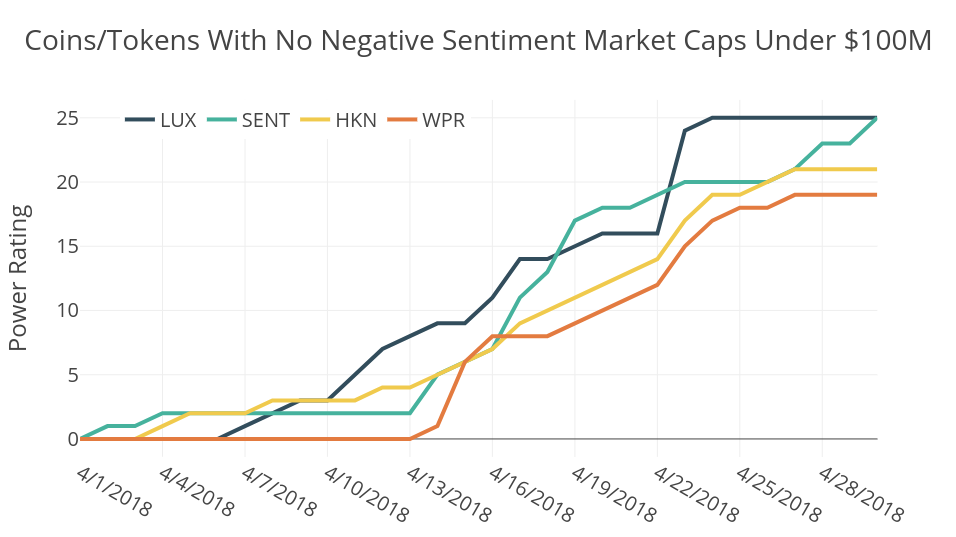 $LUX certainly has a lot going for it. It had a great month, it has an active team and it brought on John McAfee as an advisor.  It’s pricey at more than $10 as of this writing, but with a current supply of less than $5 million coins and a market cap under $20 million USD, additional volume could push that up quick.

$SENT and $HKN are more affordable and both have market caps. $SENT was among my top coins for the week in late April, and ended up outperforming the market more than any other coin on the list.

The potential is certainly there. Trade safe.

The post Finding gems: 9 cryptocurrencies with no negative sentiment in April appeared first on Coin Insider.